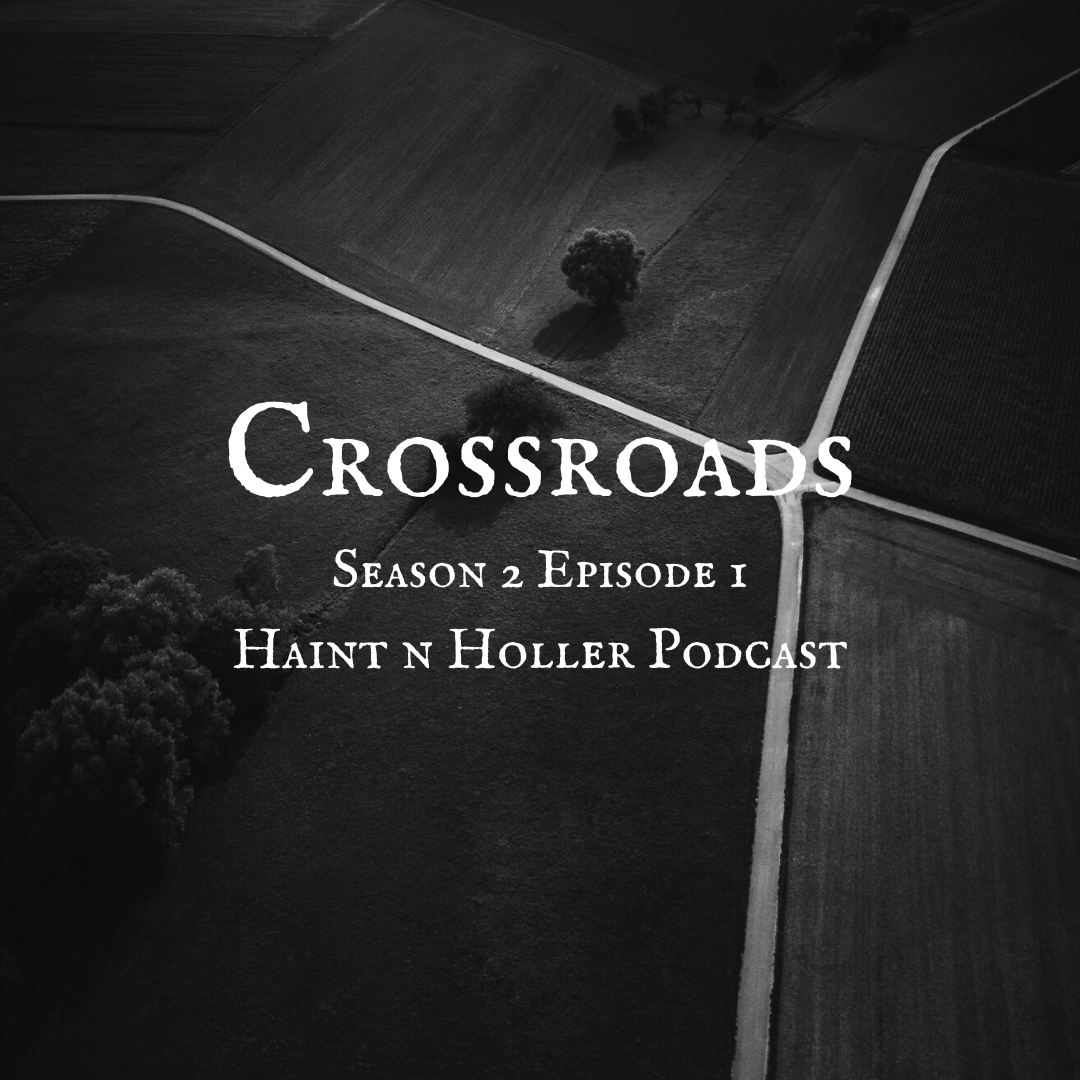 Episode 1 of Season 2, Crossroads, is live now on Anchor, Spotify, and whereever you get your podcasts.

“You go to the fork of the road on Sunday morning before day, go there for nine times in succession before the sun rise and make a special wish, a special desire, and whatever you want to do, if it’s to be a conjure or to be a bad person, then the devil comes there. First comes a red rooster, then after that the devil sends something else in the shape of a bear and after that he comes himself and takes hold of your hands and tells you to go on in the world and do anything that chew want to do.”
~ Unknown teller from North Carolina, recorded by folklorist Harry Middleton Hyatt.

Hey cousin, welcome to Haint n holler podcast. I’m D, your guide through the fantastic and fearsome world of folklore and folk practice in the south. Tonight we are talking about a location that is both sacred and profane, both secret and well traveled. A place that brings the powerfully rich low and raises the wretched poor. Tonight, cousin, we’re talking about the crossroads.

My first dealings at a crossroads was 8 or so years ago when I made my deal with the ancient deity known by many names but most commonly as Hekate.

Part of the deal, to seal the bargain so it were, was to leave food for the goddess and the dead at a crossroads. It was both the most simple of tasks and the most difficult. Not only did I need to walk to an intersection where I would not be accosted for littering my offering of bread and fruit, but there was also the manner in which to leave it.

You see, cousin, it’s considered rude to gaze upon the dead while they eat. Those who do, well, their bargain not coming through is the least of their worries. So the idea is, leave the food, turn from it, and slowly walk away without looking back. Walk, cousin. Don’t run. That’s important.

I did as I read. I set the bread and fruit on the ground near the intersection at twilight.

I turned my back on it, and walked away. So simple.

Until I heard something that sent shivers down my spine and made the hair on the back of my neck stand on end.

A dog was baying in the distance. It could have of course been a neighborhood dog, perhaps put out for the night. Or perhaps something a bit more wild. This was Alaska after all.

I took another step.

I wanted so badly to turn and see who it was but I knew better. I took another step.

The shuffling was so close, more than two feet, more than four. I swear, I felt breath, cold and damp, on my neck.

I wanted to turn, I wanted to run, I wanted to ask who was there but I knew…I knew cousin that it would be to my detriment. I knew that if I turned, if I ran, if I drew the attention of the dead, that I would regret it.

I walked, achingly slow, back home that evening. I can recall every sound I heard from the moment I turned from my offering to the moment I shut and bolted my door. The steps and dragging limbs, the wet sounds, the sounds of chewing, the baying and the howl. I remember all of it.

I also remember, I got what I bargained for and I’m grateful.

Despite being a custom across the world and through the ages, making deals or sealing bargains at crossroads has had a particularly strong impact on the culture of the southeastern United States. Most notably, perhaps, is the impact it had on blues music and legends surrounding certain guitarists and singers.

Richard Johnson’s legend might be the most famous blues crossroads story, but, unfortunately, is just that, a story. What happened was Richard got up on stage one night at a Mississippi juke joint back in the 30s. Sun House and Willie Brown were taking a break in their set and Richard decided this would be his big break. Unfortunately, he bombed. Neither the crowd nor Sun House were pleased with his performance. This prompted a three year disappearance of Richard Johnson who, then, came back and blew the blues community out of the water with his newfound skills.

Rumors spread rapidly that Richard must have had some devilish dealings to get that good when he had been known for being talentless just a few years prior. His songs Cross Roads Blues, Me and the Devil Blues, and, my favorite, Hellhound on my Trail, added to this myth. Then his early death at the young age of twenty-seven added to the rumors that the devil had come to collect at the height of Richard’s fame.

Thing is, Richard Johnson didn’t make a deal with the devil. No, in fact, he spent those three years with a mentor, Ike Zimmerman, who trained Richard up to the legendary blues singer he became.

That’s not to say there wasn’t a Blues singing, guitar playing, musician by the name Johnson who had a crossroads deal. Yes, cousin, there was. Tommy Johnson was that musician.

According to Tommy’s brother, LaDell Johnson, reported in Tommy’s biography, the musician did get some dark aid with his music.

“you go to where a road crosses that way, where a crossroads is. Get there, be sure to get there just a little ‘fore 12:00 that night so you’ll know you’ll be there. You have your guitar and be playing a piece there by yourself […] A big black man will walk up there and take your guitar, and he’ll tune it. And then he’ll play a piece and hand it back to you. That’s the way I learned to play anything I want.”

Despite his dealings and his talent, Tommy didn’t reach the same fame as the blue singer that shared his surname and his mythos – Richard Johnson. Instead, through some mishandled business and some say trickery, Tommy mostly played locally until he died in his sixties. His most famed songs, unlike Richard, weren’t about crossroads and the only devils he was noted to sing about were those related to addiction and lust. You can honor Tommy Johnson and the music he loved in Crystal Springs at the annual Tommy Johnson Blues Festival.

The dealings at crossroads didn’t start with Tommy Johnson though. No, cousin, by the time Tommy got his guitar from the dark man, it was already a well established custom in the south among hoodoos, gamblers, and other folk who needed a little help getting things taken care of.

Despite the modern conflation of crossroads dealing and the Christian devil, there are no historical accounts that Satan is the entity met during these dealings. This association was created by the story of Faust, which is itself, a fantastical tale inspired by Medieval sorcery. In fact, none of the crossroads dealings found by folklorists or hoodoo historials ever found a connection between the entity at the crossroads and the bestowal of wealth, fame, or power in exchange for a soul. Rather, the entity tended to act as a teacher that aided the willing person that asked in learning a specific skill.

The crossroads bargain goes back into ancient polytheism practices where Greeks and Romans (and others) of antiquity would leave offerings at crossroads for liminal deities like Hermes, Hekate, and similar. These offerings were also a way the community would bring food to the poor and to travelers who needed aid. The impoverished and those traveling alone were said to be under the protection of the deities honored at crossroads.

In African polytheist religions, the crossroads entity is described as being dressed in red and black and, like their ancient European counterparts, are more like teachers or, notably, openers of the way.

Opening the way is a common request in various folk magic and hoodoo practices. Road opening or gate opening is done to remove obstacles between the practitioner or their petitioner and the goal they want to achieve. Sometimes, extra aid from supernatural forces is needed to remove those obstacles. That is when a crossroads ritual is needed.

Folklorist Harry Middleton Hyatt collected several versions of the crossroads ritual in the south during the 1930s.

In some stories, no entity at all is encountered such as one from Fayetteville, North Carolina wherein you are instructed to take your dice to a crossroads before sun up. Toss your dice, pop your fingers, and say “In de Name of de Father, Son an’ Holy Ghost.” and continue until the sun has risen and it will make you a good gambler.

In others, multiple creatures would be spotted before the spirit itself appeared. The creatures, or even in some cases strange weather conditions, were almost always black. Black rooster, black bear, black clouds in the sky, and so on. The appearances tended to come in threes, which is a sacred number among many spiritual practices and beliefs.

Interesting to note, even those quotes that say that you sell your soul to the devil himself, when describing the ritual, never make mention of any pact. It’s either the devil takes your guitar and tunes it before handing it back or simply passes by and the skill you seek is then yours – no contract is signed or pact made. The belief that your soul is now his is one that seems instilled in the teller through fearful gossip rather than through any acknowledgement by the entity encountered.

In many crossroads rituals, when something is offered to the entity, it’s often material goods or food. Usually, in hoodoo, a silver coin is left at the crossroads to pay for the lesson you’ve come for.

Less common but still practiced is the act of animal sacrifice, usually a rooster. Hyatt noted one ritual instruction that you must kill the rooster and allow another person, never yourself, to eat all but a leg with the foot still attached and one of the rooster’s eyes. These should be buried at your back step and the following Sunday, before sun up, go to the crossroads to obtain your skill. Not eating the offering yourself can be seen in ancient practices such as food offerings to Hekate which only the homeless and impoverished, the dead and the roaming spirits could partake in. Never the ones making the offering themselves.

I can say from experience, that devil or no, making that walk to the crossroads in the dark is an undertaking. You gotta really want what you’re bargaining for. Want it enough to look out in the dark unknown, the liminal spaces between routes and worlds, the betwixt and between, and dare to ask for it.

And so, I leave you there, cousin, at the crossroads. What will you bargain for?

We really appreciate your taking the time to listen to our ramble about the strange and unusual. If you would like to experience more of the supernatural south, I ask that you subscribe and head on over to our Patreon. Just a dollar in the offering plate helps us keep a rambling. Thank you, cousin, for listening in on Haint n Holler podcast.