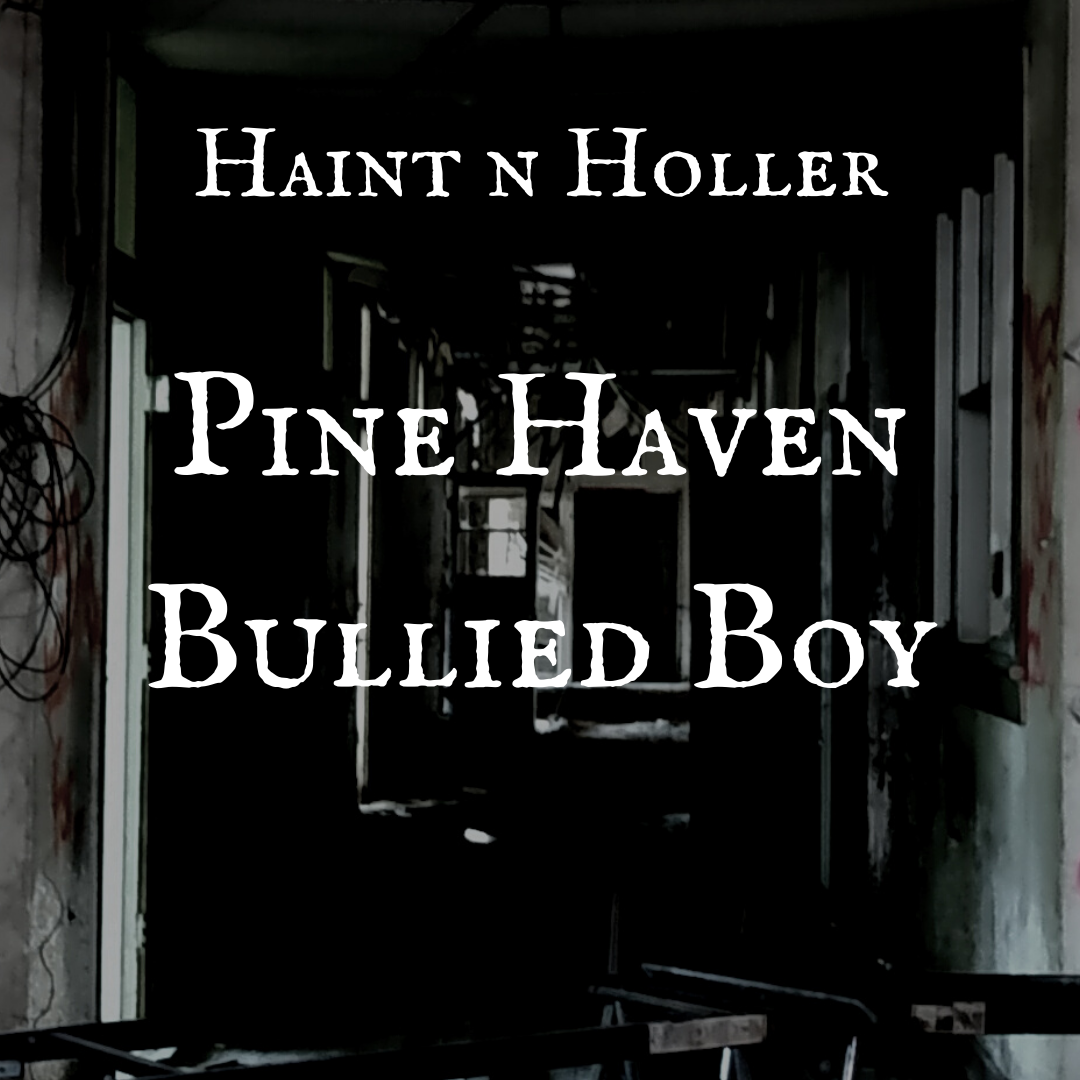 Today we share about an urban legend centering in the old Pine Haven School in Jamestown, TN. Not only did we investigate the Pine Haven Bullied Boy, we also had some interesting experiences looking into Jamestown in general. You can check those out here.

You can listen to the podcast (please be sure to subscribe) through Spotify, Google Podcast, and more. OR you can check us out on YouTube:

Mirrors and abandoned buildings – two strong ingredients for a ghost story that is sure to instill dread and cause nightmares. Today’s story has both.
Hey cousins, welcome to Haint n Holler podcast. I’m D and I’m here to share with you the folklore, ghost stories, and tall tales of the American south.
Today I share the story of the Pine Haven Bullied Boy.

Before we go any further down this dark hallway, some content warnings. Haint n Holler is a folklore podcast dealing with supernatural and horrific events. The following story contains violence acted upon a child. Listener discretion is advised.

Jamestown, TN is the heart of Fentress county. It sits in the upper part of central Tennessee, not far from the Kentucky border, on the Cumberland Plateau. It was founded in 1823, sitting on the remains of a Cherokee village. Jamestown is known, in the light of day, for its association with war heros, Mark Twain’s daddy, and as the headquarters for the World’s Longest Yardsale. In the dusky evenings and deep nights however, there’s another story that, despite being told in whispers, is much louder than any of these other claims to small town fame. You see, Jamestown is the home of a dark and gruesome urban legend.
The Old Pine Haven School was much like any other American school. It had its share of the athletic and the intelligent, the good looking and homely, and plenty of hormones and ignorance to civility to make for the dramas that all grade schools have.
Just like any other school, Pine Haven had its bullies and their victims. A victim lies at the center of this urban legend.

There was once a boy, his name unknown though some say it was Billy. However, his intelligence and vulnerability were immortalized long after the school’s closure in the late 90s. He was bullied and one day sought refuge in the boys bathroom. Unfortunately, safety was not found. His bully found him there, washing his hands as if he could wash away the pains of being a child abused by his peers.
The bully cornered him there at the sink. We can only imagine how his heart pounded as he watched the other close in through the reflection in the mirror. How he felt as his abuser raised their hands to him. The horror of that mirror as he was smashed into it.
Here the story splits, much like that mirror glass, and fractions into tales that live in the dark hearts of those who whisper it years later. Some say that the boy fell, pushed too hard, and hit his head on the sink. Others say the glass from the mirror cut him. Shards of it flew and one, led by terrible fate, found its home in the poor boy’s neck.
No matter the method, bludgeoning or slicing, the result was the same.
The bully stood, staring down in horror at what he’d done. The victim lay there, his blood poured from him just as the sink gushed water.
Terrified more still by the looming consequences of his actions, the bully sought a way to hide what he’d done.
Being strong a boy, descendant of the area’s farmers and coal miners, he was resourceful in his strength. He pulled up the loose flooring of the bathroom. He didn’t need to pull up much. The victim was small and the lifeless body was easier than ever to shove around. The bully stuck him in the floor, under the very sink where he’d been murdered, and left him there to rot.
Many stories leave it there, already horrified at the violence and implication as to how easy it might be to completely erase someone from existence. The end of a darker story still lingers. They say that the poor child under the floorboards of that bathroom wasn’t dead. Long after the school closed for the night, he regained consciousness in that dark, cramped space. Barely able to move or breathe, he tried his very best to push his way up out of the floor. But he was too week and the space too small to allow him to get his barrings. He cried out but there was no one there to hear him.
It took a week to find him. A body can only survive up to three, maybe four days, without water or food and it for a child already weakened by attack and barely able to breath in their panic and cramped space…well…we already know he did not survive. The smell alerted the school of the body’s location, they say and as to his attacker – if it was discovered, the town was very private about the results. No small town wants to be known for such a horrible deed – in fact, no one I spoke to within town authority would discuss the legend of the Pine Haven Bullied Boy with me at all. Such a stain on a quaint bit of rural Tennessee is unseemly, after all.
Of course, no urban legend that deals in blood and death can end there, cousin, and the Pine Haven Bullied Boy is no different.

The school shut down in the 90s supposedly due to damages and perhaps asbestos. A new one was built either because its cheaper to build new in the face of cleaning out asbestos or because of other, darker, reasons. The old school still stands, however. Broken, rotting, but standing in its vandalized and hollowed way.
Abandoned structures are a lure to kids and teenagers in a way no one will completely understand. No matter the warnings against safety, the signs posted against trespassing, or the fears of dark, deserted hallways – youth is drawn to these places like moths to flame.
It is said that if you go into this school, and find your way over broken glass, abandoned cafeteria tables, and the refuse of years gone by, down to the boy’s bathroom where the heinous crime was committed. You can look into the mirror that stands like a cold memorial to a victim, and see the dead boy standing with you.
Unlike in life, he is by no means weak or vulnerable in death. It is said, he seeks revenge for what was done to him and, if he sees you as a threat, he will take his vengeance upon you – doing to you what was done to him all those years ago…

The story of the Pine Haven Bully Boy is, of course an urban legend, a horrific modern myth told in a way to imply that it truly happened. What is interesting about this particular story is how real it feels.
Who among us, cousins, can say they have never been bullied in school. Those of you who can, well, consider yourselves blessed. Even then, we can easily imagine those moments – especially nowadays with the echo of Columbine and its falling dominoes that lead down a path to shooting drills and counselors trained in how to spot the abused more than how to discuss collegiate futures.
We can feel those school hallways, those bathrooms that are both shelter from the storm of students flowing up and down the school, the eyes of teachers and principles. They are also places of terror for those who have ever experienced being cornered, away from the aid of any adult or friend and the only thing coming back for you is the echo of your cries against the walls. Bathrooms have great acoustics. They are places of cleansing and of waste. There’s a reason they feature in so many horror stories.
The bathroom of the Old Pine Haven School might not have ever experienced the extreme violence of the Bullied Boy myth. I’ve been there and smelled the damp wind blowing through and out of it. I heard its silence and stepped across its glass to peer into its shadows. It may not have a ghost but I am certain it has seen its own share of bullying and anger and despair. For that, it is a haunted place where the energy of our whispered stories gather and linger and build. Yes, cousins, it is haunted.

Thank you for listening to Haint n Holler podcast. Here’s where we ask you to do the social media visitin’
Come by our Twitter and give us a follow and feel free to sit a spell and chat with us.
Also, we’re always lookin for folklore, ghost stories, and southern superstitions so if you have a lil tale you’d like us to tell, be sure to email that to us at haintnholler @gmail.com.
Lastly, if you have experienced violence at the hands of a bully and would like help, please reach out to the National Association of People Against Bullying by calling
1(800) 273-TALK
Or go to NAPAB.org.
Haint n Holler is not affiliated with the National Association of People Against Bullying, but stand with them in their mission to provide direct anti-bullying services to students, families, and schools so that children can thrive uninterrupted by hatred.