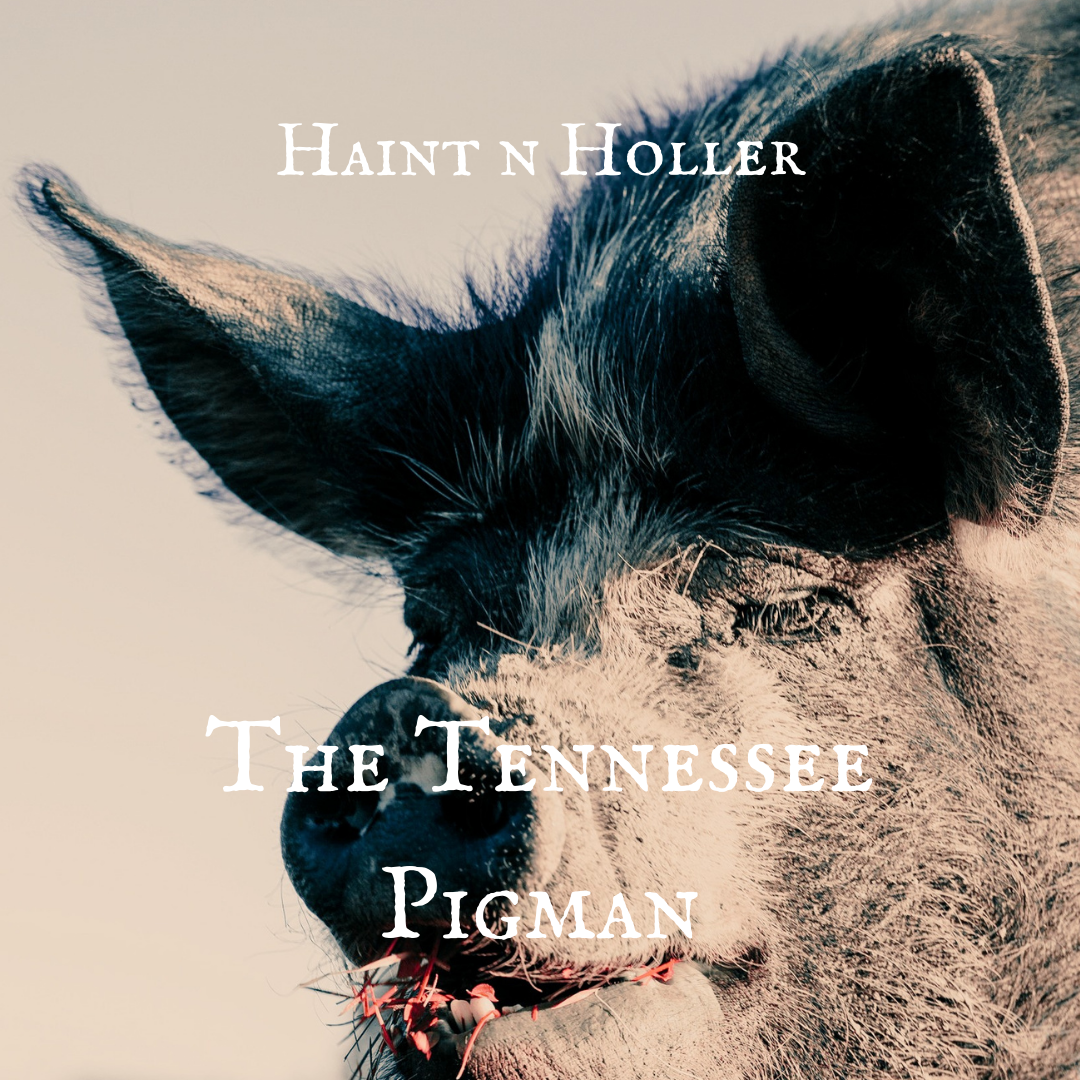 Is the Tennessee Pigman a cryptid, the sad ghost of a disfigured worker, or a murderous butcher? Lets dig through history together.

You can listen to The Tennessee Pigman on Anchor.fm, Spotify, Google Podcasts, Apple Podcasts, and other podcast apps as well as YouTube:

When I first heard of the Tennessee Pigman, I was told he was a cryptid that stalks the forests near Memphis. For those who are new to the world of the strange and weird, a cryptid is an animal that some claim exist but have no solid proof of. However, the more I researched the Pigman, the more I realized this was much stranger than some bipedal swine in the woods.

Hey cousin, welcome to Haint n Holler podcast. I’m D, your guide through the dark forest this evening where we are on the search of one of the stranger stories my home state has to offer – the Pigman of Millington, TN.

The Meeman-Shelby Forest State Park is over 13,000 acres and sits along the Mississippi River. Its the perfect place for hiking, exploring, and to take in the glory of nature…during the day. At night it becomes a strange place full of shadows, hair raising sounds, and the feeling of being watched.

Pigman is the name of the creature that is said to prowl these woods. The stories around him are as varied as those of any urban legend. Some are benign and merely creepy while others tell of a murderer straight out of Silent Hill games.

Story claims that if you go to the Pigman Bridge on Shake Rag Road over Jakes Creek and park in the middle of the bridge, turn off your engine, roll down your windows and shout “Pigman!” three times while flashing the car lights that he will appear or that you can hear him squealing nearby. Other stories claim you have to get out of your car for this to be effective and still others say it only works on a full moon as if Pigman is some sort of porcine werewolf.

How this creature came to the Meeman-Shelby Forest is a matter of some story telling debate.

One story revolves around the local Chickasaw Ordnance Works, now known as the Smokestacks. Story goes that the man now known as Pigman was a worker there who was involved in a horrible accident that disfigured his face. Shunned by his family, friends, and community, he sought solace in the forest and either still lingers there in body or haunts it in spirit. While this version of Pigman lore is relatively benign, since his ghost is said only to be spotted or heard squealing in the woods, it is said that if he feels offended by your looking at him, he might very well attack and that the Meeman-Shelby Forest has more than enough places to hide the body of an offending voyeur.

Unfortunately, this story doesn’t really have legs, at least where its origins are concerned. I did some digging around the Chicksaw Ordnance Works history and was impressed. One of the most dangerous locations for workers of the 1940s Defence Depot, the Chicksaw Ordnance Works produced raw TNT and gunpowder packed into high-explosive “cakes” called guncotton. While it sounds terrifying, there were two very important facts around this production plant. First, guncotton was a waxlike cake that, while it will explode when detonated in a gun barrel, if you put a match to it it will burn more slowly than celluloid.

Secondly, the plant was very cautious about anything that might create a spark. Employees were fired for having matches, lighters, and even ballpoint pens, since a simple click of that pen might create a deadly spark.

This attention and care paid off. During its years of operation, the Chickasaw Ordnance Works never had a serious accident, and earned the coveted “E” pennant from the U.S. Army for its near-perfect production efforts.

For those playing at home, this means that pigman could not have been created in a catastrophic accident at the Smokestacks as there was no major accident to create such disfiguring injuries.

Some accounts of Pigman don’t include any disfigurement of the person but rather that he wears the skin, face or head of a pig like Leatherface out of Texas Chainsaw Massacre.

The second story I heard about Pigman is much less about a poor disfigured man and more the stuff of vegetarian vengeance. Supposedly, Pigman was a pig farmer and butcher in Millington who was cruel to his animals. For a gag, he would post the heads of his pigs on pikes around his farm to scare off folks or just for gruesome decoration. I don’t think Country Living would approve. One day, there was an accident – a common theme in the Pigman stories – which caused the man to drop partly or completely into his pig pen. Some say the accident killed him while others say that he was merely incapacitated. Either way, the results were the same. The pigs took their vengeance on their cruel butcher and ate him – focusing mostly on his face and head.

The ghost of the butcher Pigman that haunts the Meeman-Shelby woods is said to no longer have the head of a human but that of one of his pigs. Those brave or foolish enough to call upon him are said to receive the same cruel treatment as his pigs and their heads will be put on pikes around his own haunted area of the forest.

While this story certainly gets points for scary creativity and I’m certain when sitting in a car in the forest at night it will give listeners a thrill – it too doesn’t have much to support it historically.

While there are farms with livestock in Millington, there aren’t any historical accounts I could find of a man eaten by his pigs. Also, piking pig heads, while a great horror story detail, is a waste of good product – something I doubt a butcher would put up with no matter how cruel. Lastly, while there are some unfortunate reports of people going missing in the forest and having accidents – these are fairly common for any wilderness location. None of them include missing or piked heads.

What is very interesting about the pigman story, is that Tennessee is the not the only location with a porcine cryptid or ghost. Reports of a man-pig combination terrorizing folks can be found in New York, England, Holland, and France.

The New York Pigman was the inspiration for the American Horror Story Roanoke character, Piggy Man.

Sadly, none of the Pigman stories from any location have had any explanation or proof other than stories told in the dark.

Well cousin, was the tale of pigman enough to give you goosebumps this spooky season? Are you willing to dare the doubts and try calling him on the bridge at night? If you enjoyed this story, be sure to hit that subscribe button for me. For details on the history and research behind our stories, come on over to our Patreon. Every dollar in the offering plate helps keep the mic recording. As always, thank you for listening to haint and holler podcast.