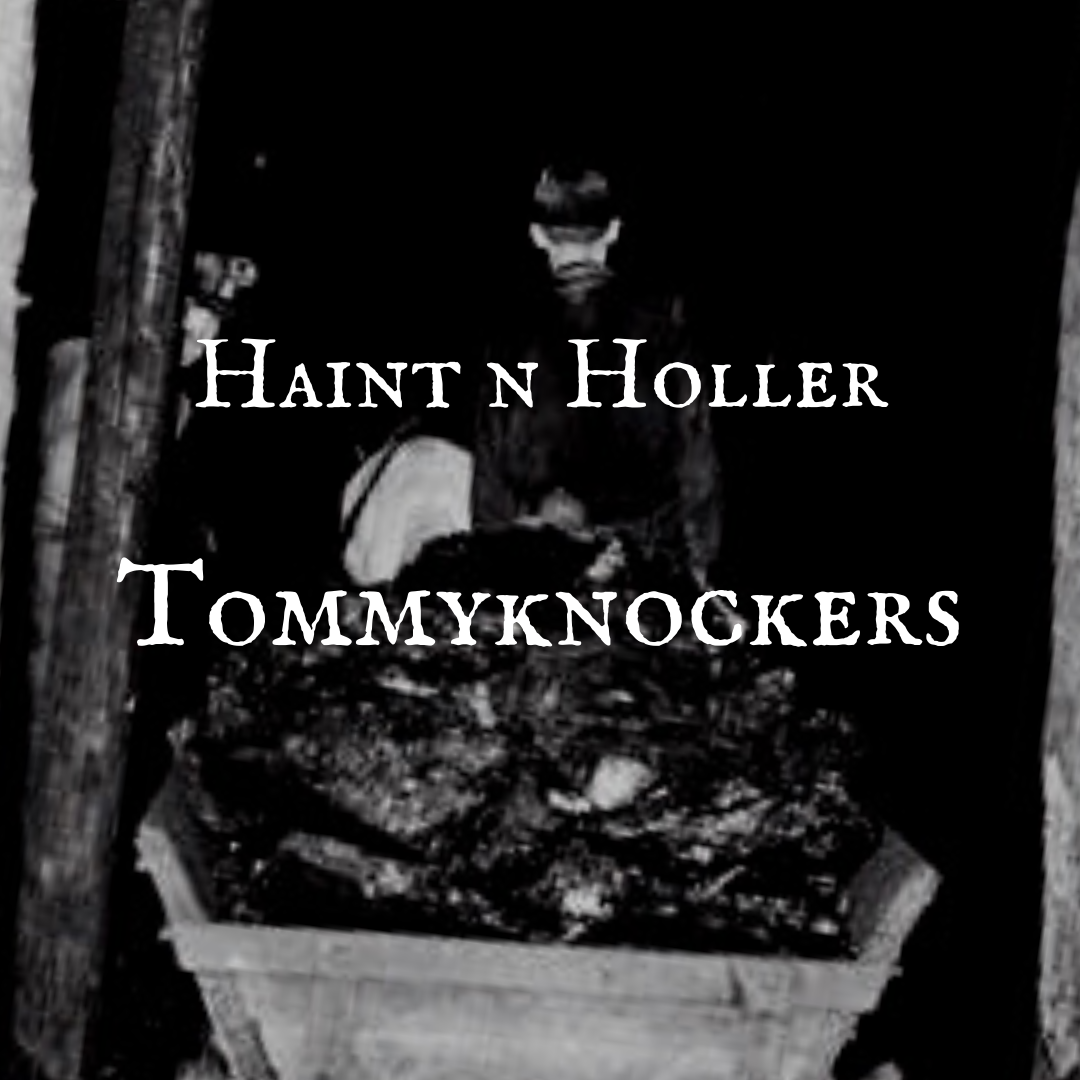 Were Tommyknockers goblins in the caves, the ghosts of dead miners, or anti-semitic folklore brought over by immigrants? Listen to the latest episode of Haint n Holler.

Late last night and the night before,
Tommyknockers, Tommyknockers,
knocking at the door.
I want to go out, don’t know if I can,
‘Cause I’m so afraid of the Tommyknocker man

Hey cousin,
Welcome to Haint n Holler Podcast. I’m D, your guide into the shadows and I hope you enjoyed our little poetic intro. That was the obscure children’s Rhyme, Tommyknockers, picked up by the illustrious Stephen King for his novel under the same name. Tonight, we won’t be discussing modern fiction from Maine, however, but the inspiration of it that deeply effects those folks in the Appalachia mountains – miner lore and, you guessed it, Tommyknockers.

Before we continue, cousin, a few content warnings. As we dig through history we come across humans being entirely human, including their downfalls, hatred, bigotry, and other darkness of the human heart that rivals the bleak, lightless tunnels of a mine. This episode of Haint n Holler references those historical events that include anti-semetism, racism, and abuses. Listener discretion is advised.

In 1673, Louis Jolliet and Father Jacques Marquette discovered coal during their exploration of the Mississippi river. It wasn’t until 1748 that coal was commercially produced. It was at the heart of most American industry from streetlights to war material to locomotives.
This production, like most in our history, is won on the backs of laborers whose names are only remembered by their families and in scraps of paper collectors deemed notable enough to save. Coal industry wasn’t just built on their backs. It was cultivated in their lungs and eyes, in their joints and tendons. It was built on their blood, sweat, tears, faith, bravery, and desperation because they had to do what they could to support themselves and their families in a world and time that didn’t give them many options.
Coal miners were widely poor and undereducated. The mines were owned by wealthy white men and the workers were a mix of poor white men, mostly Appalachians and immigrants, as well as black men. Post civil war, the whites and blacks were encouraged to work together not out of any desire to encourage interracial relations so much as to discourage the white miners from unionizing.
These poor men were paid pennies and paid themselves with their lives and the lives of their families and children to open the earth. Many literally dug their own graves. You see, when you open the deep dark heart of the earth, when you bring light to a place that has never seen light and perhaps never should have seen light, you take a risk. That risk these miners faced by bringing their faith into the dark with them. Not just faith in god, though, while it is said there are no atheists in fox holes, there are very few in the deep dark of a mine either. These men also brought their faith in other things into the mines. Things that might be laughed at in the light of day but down there in the shadows, the heart knows its true, or hopes it is, because it needs to know that there is something beyond the coal dust looking out for him.

Tommyknockers are one of those things that the coal miners believed in or at the very least told stories about to bring that spark of hope like a light into the mouth of a mine. While there is some disagreement as to what exactly these entities are, their commonality in folklore reaching across history and over many areas and cultures makes them a key part of learning about miners and the mines themselves.
The earliest recording of these entities goes back to the 11th century tin mines in Cornwall. They were called Knackers and were said to either be goblins or the ghosts of Jews, an ethnic group that in the poorest county in Britain was treated horribly through history and, as we see here, in legend. Knackers were said to be short, gnarled men and if there was a landslide or flooded tunnel, well the Knacker was the one to blame. Now, whether this was a goblin turned Jewish Tinner in the 19th century as an anti-semetic counter to the mythological parables of Good Christian Farmer or if it is a throwback to an oral history that we no longer have access to except through bigotted retellings, we cannot know.

In 1548, General Agricola, wrote the following describing knockers and their doings in Europe which is reflected in modern folklore we have here today:

“Then there are the gentle kind which the Germans as well as the Greeks call Cobalos, because they mimic men. They appear to laugh with glee and pretend to do much, but really do nothing. They are called little miners, because of their dwarfish stature which is about two feet. They are venerable looking and are clothed like miners in a filleted garment with a leather apron about their loins. This kind does not often trouble the miners, but they idle about in the shafts and tunnels and really do nothing, although they pretend to be busy in all kinds of labour, sometimes digging ore, and sometimes putting into buckets that which has been dug. Sometimes they throw pebbles at the workmen but they rarely injure them, unless the workmen first injure or curse them. They are not very dissimilar to Goblins, which occasionally appear to men as they go to and from their day’s work, or when they attend their cattle.”

Whether mischief or aid, what we do know, cousin, is that the knacker, or knocker, didn’t remain in Europe. In the 1820s, the Welsh and Cornish miners immigrated to America and settled in communities that reminded them of home, specifically the Appalachian region. Some say they brought knockers with them, whether simply by spreading folklore or by bringing actual entities under the name Cousin Jack. Others say they didn’t need to bring such unnecessary baggage, that the mines here were already occupied with such spirits. They only needed digging up.
Now in the US, the knockers, here called Tommyknockers, had some very different stories told about them. No longer were landslides or floodings blamed on Jews. In fact, many miners declared the knockers to be beneficial, if mischievous, spirits. They attributed the knockers and their knocking deep down in the mines, to be warning signs telling miners to get out before cave ins or other deadly problems occurred. Some new or relocated miners refused to enter the mine until they verified that there was indeed a knocker there already.
They gave part of their food to these entities in hopes of winning their favor, and to keep them from stealing said food and other items when the miners weren’t looking.

As with most folklore, another route was carved into the stone of story and culture. Tommyknockers in the US were deemed not to be goblins or dwarves or other entities but human spirits. They were the ghosts of miners either warning their brothers of danger or angered by their life’s sacrifice to the mining company’s greed.
Ghosts in the mines is hardly a wild concept when you consider all the horror around the job that causes those ghosts in the first place. Workers rights and child labor laws are far more recent than mining. Accidents happened and, as it is with the system, there was always someone to take a downed laborer’s place – the poor always need work. Black lung and other diseases of malnourished and overworked varieties were more common than fresh bread. Death was a close bedfellow in the mines on a good day. On a bad one…well…thats when disasters happen and the mines and the dead call for blood in mass.

In May, 1902, 216 miners were killed by the initial explostion in the Fraterville mines in Tennessee. Although 26 had managed to barricade themselves in a side passage. At least 10 were still alive seven hours after the explosion, but eventually succumbed to toxic air and lack of oxygen.
December 1907, the worst mining disaster in history took the lives of 362 men in West Virginia.
As recently as 2010, 38 more miners were killed in disaster in these Appalachian hills.
The many sacrifices made to the mountains and the coal and the darkness are bound to produce ghosts.

Belief in the knockers in America remained well into the 20th century. When one large mine closed in 1956 and the owners sealed the entrance, miners and their descendants circulated a petition calling on the mine owners to set the knockers free so that they could move on to other mines. The owners complied.

Tommyknockers aren’t the only miner lore that has been passed down through generations of hard working men and their families. Other bits of superstition and omen include:

So, cousin, if you ever find yourself near a mine or looking at old photographs of your papaws and uncles and cousins covered in coal dust, remember these hard workers and their beliefs that gave them what security they could find as they entered the darkness.

If you enjoyed this little bit of history and lore, consider hitting that subscribe button for more of the kind. And if you’d like early access and a peek behind the scenes and beyond the story, come on over to our patreon. Every dollar in the offering plate helps to keep the mic recording.

We appreciate yall listening. See you next time on Haint n Holler podcast.