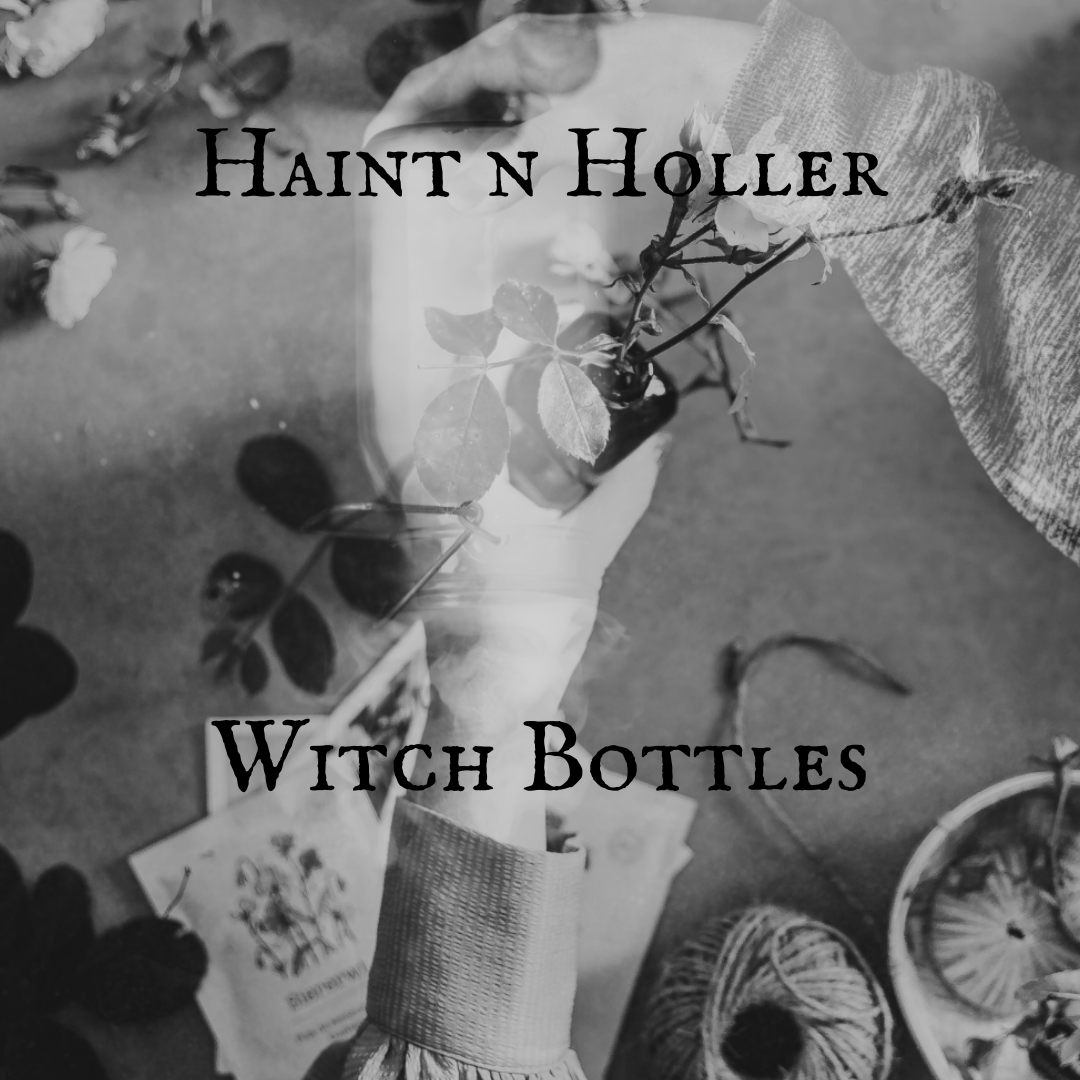 You can listen to the podcast on Anchor.fm, Spotify, Google Podcasts, Apple Podcasts, and other podcast apps as well as YouTube:

In the days before security alarms, cameras on the door bell, and hell, before electricity in the home – folks had to find their own means of protection. This usually meant a deadbolt, a good fierce dog, and a shotgun near the door. However, folks also found they had other things to protect against. Things that didn’t care about walls or physical boundaries. Things that would send a brave dog running with its tail between his legs. And things that a shotgun wouldn’t much bother to be honest.

I’m talking about spirits, ghosts, and other things. Haints and boogeymen that came to rob you of your sleep, and thats all if you’re lucky. But not just the ethereal. Folks also had to protect against each other – people putting the evil eye on you, coming to collect debts that they aren’t owed (or even when they are), and coming to do harm to a body and a soul if they have the knowing of how.

So a family had to rely not just on physical means of protection but also metaphysical means. Thankfully they weren’t alone. Ancestors going back ages have had ways to protect themselves from things we cannot always see or touch. They carried these with them as they traveled and passed down these ways through generations. Neighbors picked up on it and that was just the way of things in the South – we are a practical folk and hell if something works, we’ll try it.

A small disclaimer. Here at haint n holler, we are open to all walks of faith and practice. Tonight’s episode is on practices that are considered witchcraft, hoodoo, and other related terms that have been brought to or developed in the south. We believe these practices are important to our history and heritage and will approach them with the same respect we give to other folk practices and beliefs with hopes that you will do the same.

In 2016, archeologists discovered a talisman at the hearth of a Civil War encampment created by the Confederate army but occupied by Union troops. It was a blue glass bottle made in Pennsylvania between 1840 and 1860. Inside the bottle was a collection of iron nails.

This talisman, was it commonly referred to as a witch’s bottle, comes to us from East Anglican folk practices of the middle ages. Much like any other luggage, immigrants brought their practices and beliefs with them to America, especially practices that would protect them in strange lands.

This particular witch’s bottle is one of less than a dozen that have been found in the states. Joe Jones, director of the William & Mary Center for Archaeological Research who investigated the artifact, stated, ““It’s really a time capsule representing the experience of Civil War troops, a window directly back into what these guys were going through occupying this fortification at this period in time.”

The Union soldiers from Pennsylvania held this particular encampment, called Redoubt 9, only during times of risk, such as Confederate raids. Jones says, “There were a lot of casualties and fear during this period. The Union troops were an occupying force in enemy territory throughout most of the war, so there were plenty of bad spirits and energy to ward off.”

A witch bottle talisman works by taking a vessel – bottles usually made of glass or clay but also mason jars have been used as well as tin cans and syrup containers – then add sharp objects like nails, pins, needles or broken glass. Often the concoction is topped off with personal items such as fingernails or toenails, hair, blood, and urine. The bottle is then sealed and placed. Witch bottles are mostly buried at doorsteps, displayed on window sills, and hidden in the walls, chimneys or attics.

Virginia isn’t the only southern location where such bottles have been discovered.

The Hermitage plantation in Tennessee revealed four medicine bottles found underneath the floors of slave habitats.

One part of witch bottle lore is that some believe witch bottles were also a device used to capture elusive haints.The spirit is lured into the bottle which is then sealed and thrown into the river.

In Louisiana, a witch’s bottle was indeed found beside the water. Shane Mears, a treasure hunter by trade, often goes searching and digging into the soil, river banks, and other areas around New Orleans. On June 9, 2020, he slide a 5-foot-long, thin steel rod into soil foundation of a construction site on Brooklyn Avenue by the river until he felt it meet something hard. From there, he dug up a lace-up shoe similar to what ladies wore in the 1800s, some animal bones and a small, old-fashioned, glass bottle filled with murky liquid.

Looking closer at the bottle, he saw that it contained what looks to be a human tooth, hair, and an insect in the unknown liquid.

Witch Bottles, even those that are found, are believed to be active as long as the bottle remains hidden and unbroken. Something to consider if you find one under your own hearth or doorstep.

While the find is spooky, Mears says finding the New Orleans witch bottle and similar items makes him less fearful of his own mortality. “There’s something about it,” he said. “You’re back in time, in a time capsule by yourself, bringing these people back — these people who are forgotten.”

Similar to the witch bottles is the folk practice of the bottle tree.

You might have seen many folks in the appalachian mountains and in the south like to hang blue bottles, as well as other colors, from posts and trees in their yards. This aint just some peculiar, folksy yard art or an attempt at artistic recycling.

Bottle trees are another form of protection against haints. The idea is these spirits get trapped in the bottles during the night when they are most active. Like a bug in a jar or a fish in a net, they can’t see the way back out and will moan through the night, creaking that bottle tree. In the morning, as the sun rises, the haint has nowhere to go and, having nowhere to hide, is thus burned up in the hot rays of light.

Some swear by blue bottles – blue protects best they say and theres nothing that will do the job like it. Others say use whatcha got because that’s what granny did and the only reason blue made it on the tree was that’s what granny had. That, in the end, having one with any glass bottle was better protection than nothing at all.

Blue, however, seems to be the magic color – at least according to the spiritually inclined and mainstream decorators.

There is a strange dissonance when something old and magical, something that modern kinfolk laugh off and more often than not laugh at, is picked up and marketed on mainstream media. When I saw chain stores selling bottle trees and popular decor magazines with articles to help you find the right shade of blue for your porch ceiling – well…dissonance was certainly a way to put it.

You might have seen a number of houses in the south with their porch ceiling and sometimes doors painted blue. While quaint, there’s more to this style choice than aesthetic. The Gullah folks in Georgia and South Carolina are said to have started it up in the United States. The enslaved Africans brought the practice and beliefs with them.

You see, haints – spirits and ghosts who mean to trouble the living – are said to be unable to cross water. Those who hold that belief use the color blue to either trick a haint or represent the water energy and harness it to their purpose.

They also had access to the color with the indigo trade.

Today, haint blue paint doesn’t just protect a home from spectres. I know several folks who swear by it to protect the porch from nesting wasps and various flies which to some folks is a far worse menace than some booger or haint stopping by for a visit.

Well cousin, I hope you enjoyed this bit of down home education. Be sure to subscribe for more of the kind. If you’d like a peek at what lies beyond the story, the strange paths we tread to find these histories and folk practices, head on over to our Patreon. Every dollar in the offering plate helps us keep the mic recording. Thank you cousins, see you next time on Haint n Holler podcast.